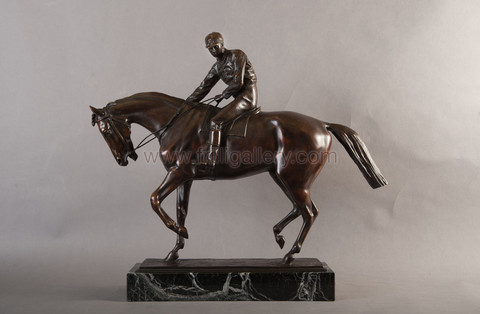 Isidore Jules Bonheur, son of the painter Raymond Bonheur and brother of the famous Rose, was born in Bordeaux. At first he studied painting with his father, but soon he enrolled at the Academy of Fine Arts where he learned sculpture. He made his debut at the 1848 Salone and since then he has performed regularly in the Salons and at the Universal Expositions where he won the gold medal in 1889. Working with a mannerist style, Bonheur, although not particularly original as a sculptor, was however a keen observer of nature and his animals were not "humanized", but were modeled to capture the true moment or pose characteristic of his own species. Bonheur was a keen observer of nature capable of recreating absolutely realistic sculptures. Unlike other animalier artists who had a tendency to give human attributes to animals, Bonheur modeled his works to return an almost realist effect.