King of the Sun (group) 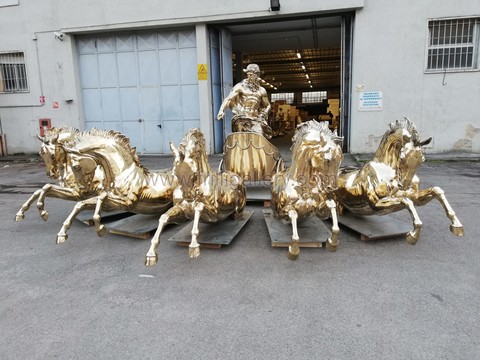 The sculptural group depicts the Sun King, the god Apollo, leading a quadriga in the sky representing the chariot of the Sun. The quadriga is most frequently represented in profile, while later frontal views also appear. Especially in Roman times it becomes a traditional symbol of triumph or victory and fame and as such it often appears in imperial representations, such as in the sculptural groups that were raised above the triumphal arches. The use has continued in modern triumphal arches as well. The quadriga is a chariot (or fast two-wheeled chariot) pulled by four horses, driven in various events by the charioteer.