Abduction of the Sabines after Giambologna 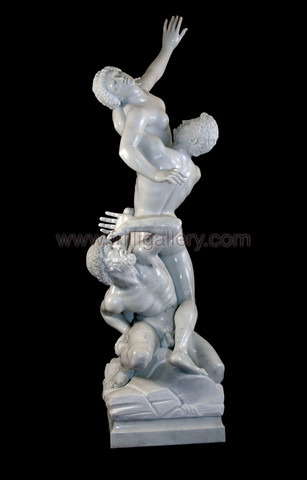 The Abduction of the Sabine Women is an episode of the legendary history of Rome according to which Romulus, who had just founded the city, tried to come to terms with the neighboring populations to provide them with women who would procreate and populate the Urbe. But faced with the clear rejection of the respondents, the King of Rome, organized a big party to distract them and kidnap their women.
Giambologna (1529-1608) has reinterpreted this theme by sculpting the figures from a single block of white Carrara marble. The sculpture is also known under the title "The Three Ages of Man" and depicts just three figures: a young man who raises in his arms a woman, while an older man, wedged between his legs, seeks to hinder it.
The irrepressible beauty of this incredible sculpture is expressed in the aesthetics of the body forms and the expressions of the faces that strongly convey the feeling of struggle that underlies the theme. The three figures are perfectly and distinctly outlined, they seem to be screwed one on top of the other, rotated and stretched rising up in the air.
This group is considered the masterpiece of Giambologna. The artist's hands transform a large monolith into a masterpiece of lightness and balance that, according to Mannerist canons, makes the statue a dynamic whole of emotions, in poses that offer multiple points of view. He intended it as a demonstration to the world of his exceptional artistic ability. The sculpture is signed OPVS IOANNIS BOLONII FLANDRI MDLXXXII (Johannes Opera of Boulogne of Flanders, 1582).
Francesco I Medici, Grand Duke of Tuscany, requested that the work of art be placed in the Loggia dei Lanzi on Piazza della Signoria in Florence.