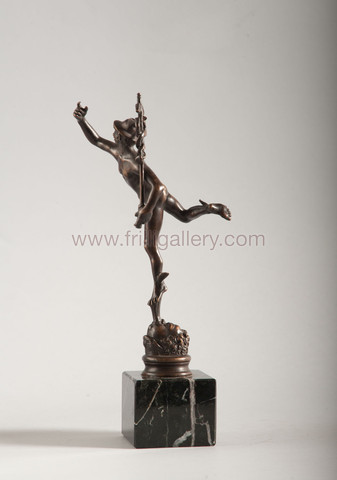 This model of the Mercury dates back to 1580 and it decorated the Villa Medici in Rome until 1780, where Ferdinando de' Medici wanted it as the crowning of a fountain, in the middle of the staircase between the sumptuous garden and the entrance loggia to the main factory. He was then taken to the Uffizi Gallery in Florence and in 1865 he moved to the Bargello National Museum.
The Mercury is one of the most famous and most replicated works by Giambologna himself, emblem of Mannerist sculpture, conceived to be admired from every point of view. Mercury is resting with his left foot on the wind generated by the mouth of Zephyr. The messenger of the gods is in fact to plunge thanks to the wings that are grafted to the ankles. The right leg, instead, is bent backwards like the left arm that holds the caduceus. The right arm is facing up and anticipates the ascent to the sky. On the head he wears the traditional helmet with wings. It has a thin and light body and the pose taken by Mercury does not communicate muscular effort in the action. The god seems instead to make the upward momentum with the agility of the dance.