FLORENZ ! The portrait of a city changing its face over seven hundred years

On such special occasion the Frilli Gallery is proud to announce its participation to the Exhibition trough the loan of two faithful bronze cast replicas of the panel "Sacrifice of Isaac" by Lorenzo Ghiberti and Filippo Brunelleschi.
Those two panels started the contest announced in 1401 by the Opera del Duomo for the commission of the north door of the Florence Baptistery.
The battle between the two rival masters of the Florentine Renaissance, saw the victory of Lorenzo Ghiberti as we know today.
This moment, in the cutural and artistic life of Florence, sets a milestone adn signs the end of the Gotic period and the beginning of the so called Renaissance period on a global basis.
The interpretation of the Old Testament episod differs drastically between the two artists, and the comparison is extremely interesting.
The replicas were cast in lost wax bronze, following the exact same technique used by the Renaissance master. The acquisition of the original mold was obtained trough a digitalized 3D scanning of the surface of the original panel. 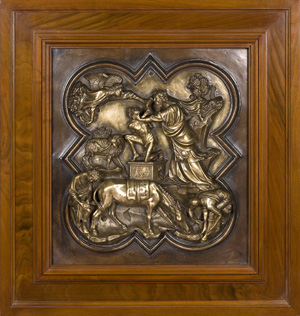 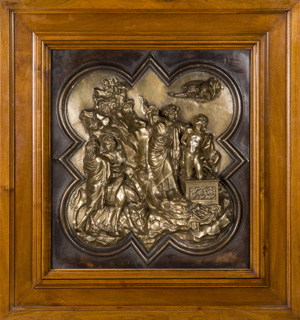